When working in customer’s homes we are abiding with all Government
Guidance. 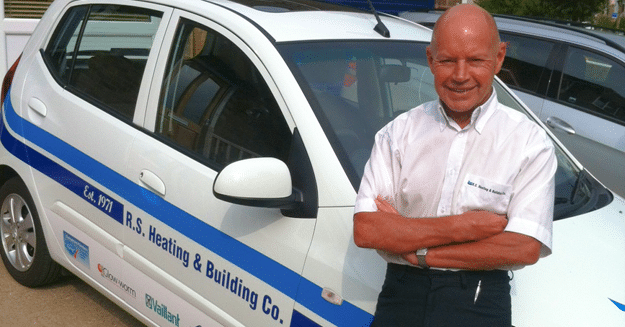 At that time most Companies installing heating were well established plumbing firms, such Albert Jackson’s, Norton’s and William Green’s (all of the of West Bar area) who had progressed into the “new fangled” central heating market.

Wanting a different, more modern title, I decided to use just initials (at that time almost unique) and decided on my own which are Roger Stephen to form R S Heating Co., a wholly central heating dedicated Company.

In that era there was little in legislation (CORGI being a voluntary organisation) and no credentials were required to fit gas, solid fuel or oil central heating. There were substantial areas of Sheffield without gas i.e. the Highcliffe Road end of Greystones Road, Long Line, most of Derbyshire villages and many more. Thus it was important to be able to offer a wide range of products, not just gas.

Realising the importance of trade qualifications, training courses were attended with Shell at Acton in London, obtained certification with the original Coal Utilisation Council (later to become the Solid Fuel Advisory Services, later still to become HETAS) and was one of the first CORGI members with a registration No. of 1064.

As I am probably the worst plumber in the Industry for actually fitting equipment, all my standing is in the design of Heating / Plumbing systems, from Churches to the smallest of homes. I’ve always thought (and I am always in great admiration of the artistry that a good installer makes) that if I can get the design and organisation of work correct, then the life of the fitter is so much easier making the satisfaction of the customer more assured.

The industry has witnessed and adjusted to many changes. On the larger installations, oil was usually preferred as it was much cheaper to run although dearer to install than gas. Trianco Redfyre, Potterton or Worcester were the choice makes The sitting of the oil tank could be a problem and I can remember actually having an oil tank constructed in the cellar in a house in S11!

Solid fuel was extremely popular, with Parkray or Redfyre type room heaters and 4 / 5 radiators giving a good background heat with lashings of hot water to thousands of  homes. I was involved, for some time, in the installation of heating in the Miners homes of such villages as Langwith, Cresswell, Dinnington, Maltby etc.

Sadly the tragic Miners strike of ‘85 / 86 curtailed much of that business.

Hence, with the conversion to cheap North Sea gas from the traditional Town gas, it’s convenience, cleanliness and reliability through extensive new pipe lines to a much bigger area and until recently, stable pricing, Gas became King.

With the swing more to gas, I concentrated on the new generation of wall mounted boiler, such as the cast iron Glow worm Space saver but my favourite was the diminutive, copper heat exchanger New World 502. This was one of the first boilers to a have “modulating burner” which is now common on most high efficiency models. This allows the boiler to fluctuate its out-put, depending upon demand, rather than being a set output, as the normal at that time. This and other advanced features made the 502 extremely cheap to run but everybody said that they would burn out in a couple of years. They lasted for years!

I recently saw the flue of one that we fitted in 1973 on the outside wall of a house in S8. Amazed at it’s longevity I couldn’t resist introducing myself. The new owner of the property assured me that all was still well but they had just contracted a Company to replace it with a Vaillant eco TEC plus.

There have been so many changes in the Industry that it is unrecognisable to 40 years ago. In the 70’s inflation reached approximately 26% with bank rates not much better at around 25%. As registered Credit Licence brokers, we were allowed to sign the customer up, in the home with a No deposit loan spread over 10 years, at the exorbitant rates.

Because the inflation was so high, everybody wanted central heating their heating now, the Industry was booming. This was in spite of the three day working week, the winter of discontent of ’79. In Sheffield, the steel strike of ’83, which virtually closed all the steel companies brought our boom period clashing to almost standstill virtually overnight. This was followed, not too long after by the Miners strike. Not good times.

The turmoil of the Country’s economy caused our Company to diversify into Plumbing of all types and directly into building.

In the mid ‘80’s we were among the first Companies to give expert “Wall Tie” reports to home buyers when the “black ash” scare was started. Loft / Bathroom / Garage conversion, Kitchen extensions, etc. all became part of our remit and soon gained expertise in complete house refits. Customers appreciated the fact that we could be given a full works schedule, complete all tasks in the specified time leave the property clean and in the majority of cases, flowers in a vase on the mantelpiece. They only had to deal with two people – myself and their bank manager.

By this time Company had expanded its title to R S Heating & Building Co. and had become Limited under Safetask Ltd.

I thank you for the prompt and helpful advice that I received from yourself and your staff, especially Joe, Lee and Simon, whom I found to be very professional, friendly and helpful, and who left everything clean and tidy which I appreciated very much.

I know that I have dealt with you for the past 30 years when you first fitted my central heating system, and I have always been very happy with the good service that I have always received, and I am sure that I shall continue to receiv…

Can I just say a huge thank you to you and your fitters for the great service you have given us this week. When my boiler broke down Monday morning , I didn’t think that by Friday we would have new one up and running.

You kindly got the old one working by mid afternoon Monday but let me know that it was not going to carry on for much longer. We had already planned to replace it this year but once we had met you Monday evening to discuss replacing it , both my husband and myself were keen for yo…

We would both like to thank you, Joe and Lee for the installation of our new heating system and radiators.

We found your company to be very prompt and responsive to our need.

After many years with an old system it is a joy to live in such a warm house, I did not believe you that I would not need a gas fire in my dining room to supplement the heating, but guess what – you were right!!

Due to the professionalism shown by Joe and Lee, I felt confident to leave my house key with them, meaning we di…

I wish to thank you and your team for your attention in fitting our new Vaillant boiler. The fitting was completed very professionally and within the time scheduled for the fitting. We are very pleased with the performance of the new boiler and the supplemental parts that you also fitted for us.

I would also like to thank you for sourcing and fitting a new programmer that was needed unexpectedly on the day of the fitting. The electrician went out of his way to collect the part for us to ensure…

A few words of thanks for the quality and professional service when upgrading our central heating system. The installers were a delight. They cleaned and tidied as they went along and always endeavoured to leave every room in the condition they found it. Their attention to detail was matched only by their ability to drink tea!